Tragic as the downfall of CIA Director General David Petraeus might be, it’s just the symptom of a much larger problem: the “spirit of militarism.” The high rates of military divorces, suicides, and PTSD diagnoses seem to suggest that what we have asked our military to do over the last ten years has put severe strain on rank and file soldiers and their families. 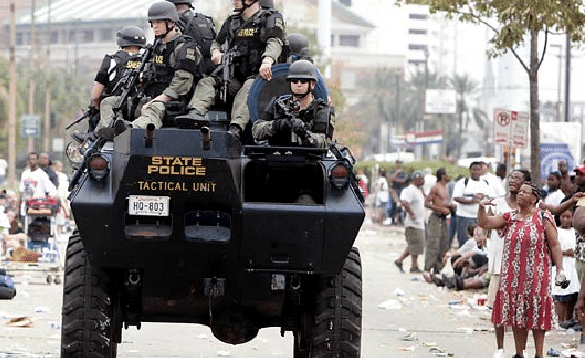 Whether or not the cracking up of the personal lives of soldiers and generals creates a practical national security challenge remains to be seen. But what is not in doubt is the spiritual question that is raised not only when the military solution seems to be perceived as the most effective choice for countries around the world, but when our whole culture becomes militarized — from our police forces to our childrens’ video games to our economy’s enslavement to the military-industrial complex.

Brian McLaren shares an incident from Jesus’ life that suggests that the “spirit of militarism” itself is the problem:

“I think of an encounter Jesus has with this fellow and he says, “What’s your name?” He calls out from him the name of what’s disturbing him. And the name he gives would be like today somebody saying, “Platoon” — because he uses a military word: Legion. So, what’s driving you crazy? What’s making you insane? “Platoon.” And so it’s this language of living in this world that’s so militarized. “This is what’s making me crazy.” And so that man is now restored to humanity from being oppressed by something inside of him, the spirit of militarism you might say.”

Jesus managed to cast out the demon that possessed the man (see Mark 5 and Luke 8). But today, the “spirit of militarism” seems all the more entrenched — and poised to not only define, but cripple our culture and our legacy.

Brian McLaren is a pastor, emergent church leader, activist, and speaker and has been named one of the most influential Christian leaders in America. He is the author of numerous books, including Everything Must Change, A New Kind of Christianity, Naked Spirituality, and Why Did Jesus, Moses, the Buddha, and Mohammed Cross the Road? Christian Identity in a Multi-Faith World.

The McLaren quote is an excerpt from the “Living the Questions” program, “Saving Jesus,” just one of many programs designed to spark conversation in questioning the dominant pop theology of Christian orthodoxy.