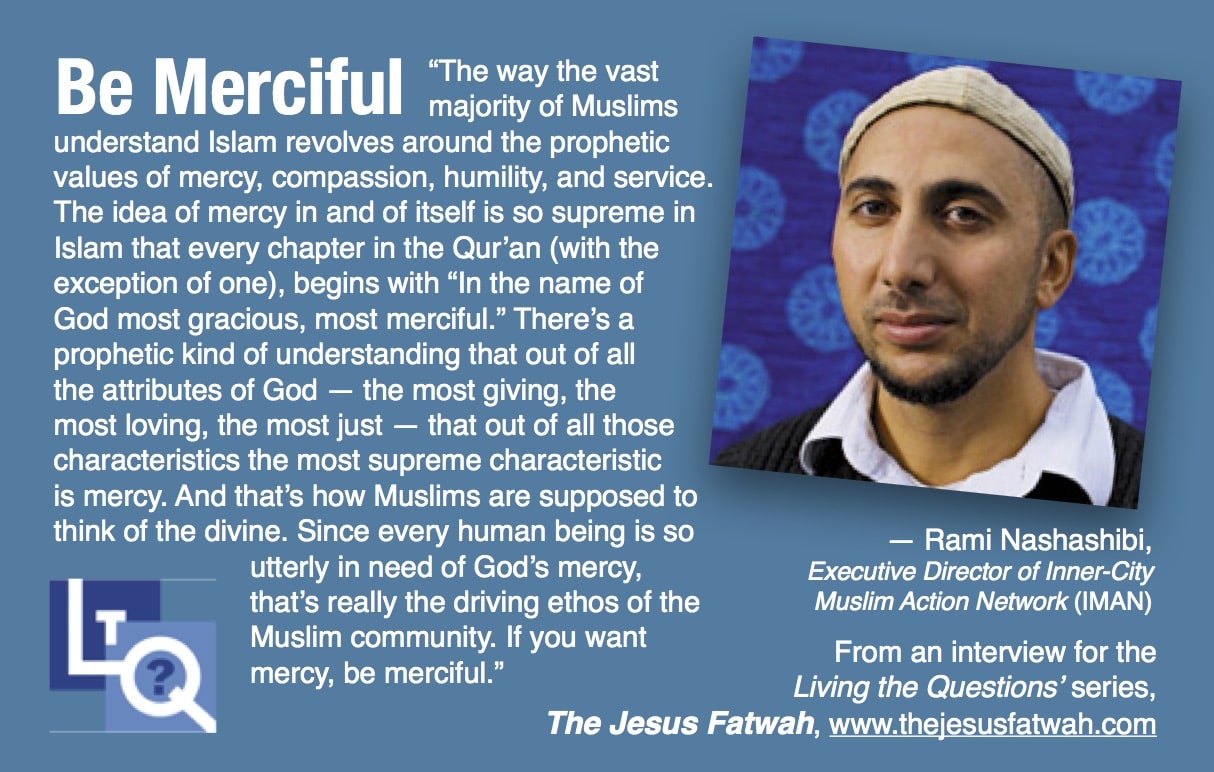 With the recent terror attacks in Paris and Africa, it becomes all the more important to be vigilant in not letting Radical Islamists destroy the reputation of Islam. Creating a world at peace requires seeking understanding and building relationships with those whom we may not have had much interaction — especially those who are dehumanized and excluded by voices of hate and bigotry.

The Jesus Fatwah is a five-session DVD and web-based series that will introduce you to Islam through input from both Muslim and Christian scholars and provide a reader’s guide that will help you gain a broad understanding of what Islam is, what it’s not, and how you and your community can resist the urge to demonize your Muslim neighbors out of fear and unfamiliarity.

One of the contributors to The Jesus Fatwah is Dr. Rami Nashashibi, Visiting Assistant Professor in Sociology of Religion and Muslim Studies at Chicago Theological Seminary and Executive Director of Chicago’s Inner-City Muslim Action Network (IMAN). Named one of the “500 Most Influential Muslims in the World” by the Royal Islamic Strategic Studies Center, Nashashibi is a straight-forward and passionate voice of reason in the midst of often heated Islamophobic arguments. In The Jesus Fatwah, Nashashibi offers insights into the practice of Islam that are a catalyst for conversations about the common values held by Christians, Muslims, and Americans of all faiths.

“The way the vast majority of Muslims understand Islam revolves around the prophetic values of mercy, compassion, humility, and service. The idea of mercy in and of itself is so supreme in Islam that every chapter in the Qur’an (with the exception of one), begins with “In the name of God most gracious, most merciful.” There’s a prophetic kind of understanding that out of all the attributes of God — the most giving, the most loving, the most just — that out of all those characteristics the most supreme characteristic is mercy. And that’s how Muslims are supposed to think of the divine. Since every human being is so utterly in need of God’s mercy, that’s really the driving ethos of the Muslim community. If you want mercy, be merciful.”

Dr. Rami Nashashibi  has served as the Executive Director of the Inner-City Muslim Action Network (IMAN) since its incorporation as a nonprofit in January 1997. He has a PhD in Sociology from the University of Chicago and has lectured across the United States, Europe, and Asia on a range of topics related to American Muslim identity, community activism and social justice issues, and is a recipient of several prestigious community service and organizing honors. In August of 2014, he began as Visiting Assistant Professor in Sociology of Religion and Muslim Studies at Chicago Theological Seminary. His work with IMAN have been featured on many national and international media outlets including the BBC, PBS and the Chicago Tribune. Follow him at @RamiNashashibi